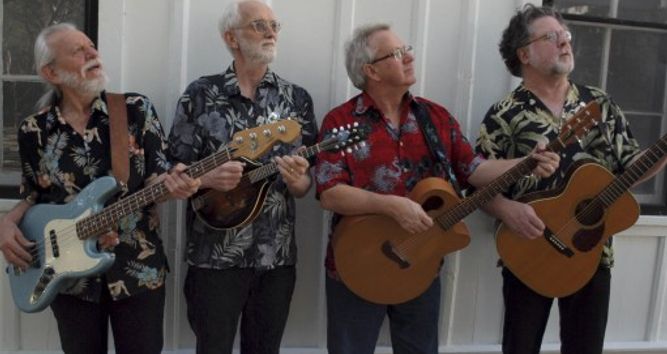 So ... Who are the Austin Lounge Lizards, anyway?

The Austin Lounge Lizards are arguable the perfect pairing of their hometown's slogan, "Live Music Capital of the World," and its unofficial motto, "Keep Austin Weird."  Since 1980, the Austin Lounge Lizards have been spoofing subjects such as politics, religion, romance, and themselves.  The self-proclaimed "Most Laughable Band in Show Business" features pointed lyrics, precise harmonies and instrumental expertise. The Lizards are:

The Austin Lounge Lizards are five-time winners at the prestigious Austin Music Awards. Their version of Irving Berlin’s “C-U-B-A” was used in the Michael Moore film Sicko. The band has been featured several times on NPR’s Morning Edition and on the radio programs Mountain Stage, E-Town, and KPIG-FM's Please Stand By.

Austin Lounge Lizards at the Duck

A return to this great music venue. Also to be live streamed—see venue for details.

Redo from last summer. We finally get to revisit the site of our “Highway Cafe of the Damned” album. All ages; tickets $15.00

Lizards Go to the Devil

Our annual foray to this great listening room in LaGrange.

The Lizards are back at one of Austin's classic venues.

This is a benefit for Heart Gallery, as program of Partnerships for Children.  It's organized by Byrd & Street and will feature them with Greg Whitfield, plus the Shelley King Band, Grace Pettis, Grouchy Like Riley, and the Lizards.  It should be a great time. We play around 8:30, but come see everyone.

Sunday with the Lizards

We are very excited to be playing at this new (to us) venue about 40 miles ESE of Sacramento.

This should be a great show.  Not only are we back and the delightful Kuumbwa Jazz Center, but we're splitting the bill with Roy Zimmerman.  If you haven't heard his brilliantly crafted and politically pointed songs, you should.  Even if you have, you should.

We're thrilled to be back in lovely and talented Redwood City.

Triumphant Return of the Lizards

Piper's is a tremendous historic venue and we're excited to be back.  For tix, go to their calendar and scroll to Oct. 16.

We haven't been back to the original Threadgill's in a long time and it should be great.

The Lizards in Summer

We love us some Cactus Café!